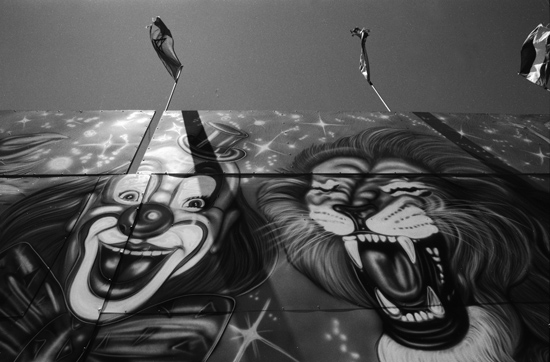 Darking the secret places behind the cloth. Remains a hand full for the out of time rehearsal. The men shout. The tumblers shout. The steel bars and lions shout. The rope cracks in the emptiness of the lights. The owner shouts. Only he overlaps the word. The scene changes quickly to another one. The stage changes. The machines change. The words and the streched shouts change. Music is behind all the rest. Uncertain, out of line, out of time. Like the hair still out of place. And the clowns yet to come. The ones that rehearsal the play are still men. They learn by heart the words and silence between them.

Outside the day runs away. The box-office fills the children's eyes with brightness. They are restless turning round the parent's row. They already heard the lions. And they want to see them. They want to see them opening their wide mouths. And the magicians who saw bodies. And the clowns that play with them.

The outcry stops, the lights are silent. The show is going to start.

A focus turns on.