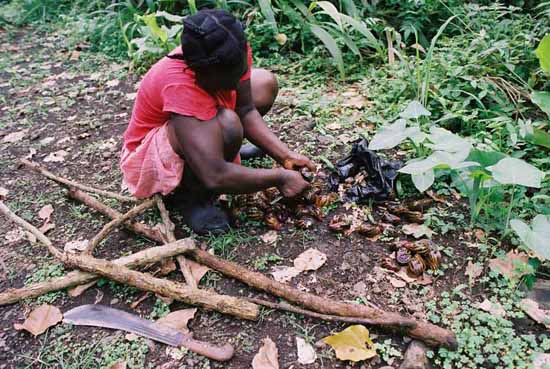 Presentation text for the journey diary to São Tomé:

"Friend...friend..." was the phrase which followed us daily along the two journeis we made in São Tomé island. In addition to this one, there were others like "White... white..." or "Sweet...sweet...give me sweet friend". These are marvellous children, bombarded by the tourists with sweets, money and other things, which drive them to beg when they find one.

The voyage was splendid by the apprenticeship we had. We leran to value every minute, the sounds, the plants, the sun, the night, the food we had, everything...

We found people still oppressed by the past, with lacks in alphabetism, with difficulties in integration, little undertaking. People lost in the ocean. With time, we learned that inside their disorganization, they are organized at their own way, which we are not used to.

We had the occasion to practically visit the entire island of São Tomé and to know the historical legate left by the Portuguese. To perceive history, how's a plantation and to see that in an island with 80 km exists a diversified culture, with different dialects and several descents, since Angolans, Cape Verdiens, to Mozambicans. Each plantation was a small world, composed by a school, hospital, church, senzalas and the house of the employer, who normally was at the highest point of the plantation.

We felt, that every place we entered, was a voyage in time, the colonial houses, the wild landscape without organization, the strong and realistic sounds of animals at our side without specified separation from us, free. Clothing are any useful fabric, there's no fashion for anyone there. Food, is what falls from the tree.

We left with much desire of returning, by the air which is breathed, the nature that greet us, the sea côncon, the pirogue, the omelet with micôcô herbs, the plantations, fish belly in the container, the coconuts, the desire to give something that can help the future of so many children born without path.

* Gravana, season of the year relatively drier, that goes from half June to half September.