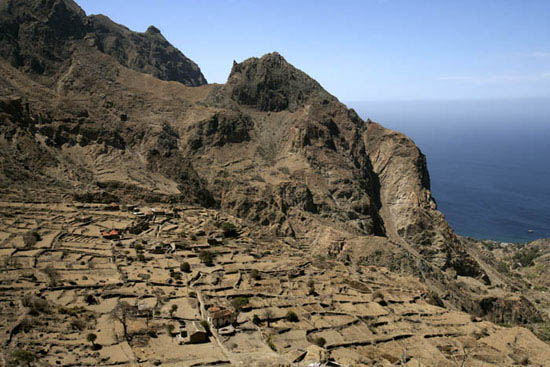 It was with great joy and interest that, when it was decidided, in the magazine "Volta ao Mundo", to make a front page reportage about Cape Verde, me and my friend Paulo Rolão started to search the shelves of bookstores and pages on the InterNet. For our surprise there was almost nothing about the subject. We were in 2002.

The fifteen days we spent there were unforgetable, and the reportage we made about six of the nine inhabited islands, became an icon of that phase in the magazine. We made a small practical guide, that during some time, was the only thing I saw that resembled a traveller's guide.

And we made friends. In Cape Verde it's so easy to make friends! The "cachupa" fried in a desert disco with Adriano and Cipriano, talking about literature and music, emigration and life experiences, will be forever an image only existent in our souls.

The surprises followed: the sea and desert in Boavista; the intensity of Tarrafal and an assembly with the performance of Ildo Lobo (and the enchantment of a pair of green eyes) in Santiago; the massacreed feet asking for more in the walk through the Paúl Valley in Santo Antão; the fried morey of Salamansa in São Vicente and the saw-fish of Sal; and Fire.

Fire. My island. The curve of the road that without warning, makes the Moon that's the volcano, enter through the eyes. The improbable city of São Filipe descending the hillside and finishing on the cliff.

Four years later I returned, again with a great friend, Guedes. Three weeks and seven islands. I collect two more and one to frustration. Maio and Brava were new discoveries and, maybe are also those where few adventure to go. Specially the remote Brava, right beside to Fogo, but that the canal's sea and crossed winds separate of those who want to go there, and those who need to get out. But we went there, and we were brave. Because only the braves go there and only the braves live there.

From all islands only São Nicolau is the one I've never been to. One missing to make the full and to kill frustration. And as Cesária says, I already feel "sodade desse nha terra di São Niclau".