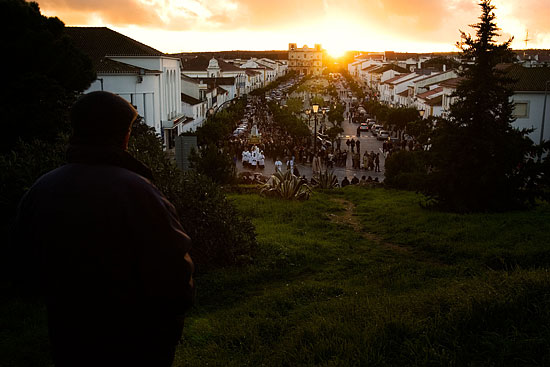 400 years ago, king D. João IV placed his crown at the sanctuary of Our Lady of Immaculate Conception, in the small Viçosa Village, in Alentejo. By doing this he greatly emphasized the cult of the Virgin in Portugal, saying in the occasion that he trust the fate of the country in her hands, unless Rome dictated otherwise.

The original statue of Our Lady of Immaculate Conception dates from the 14th century and it's made in stone. It's vestments are from the 18th century. Villagers used to carry another image around town in the yearly procession on December 8th because the original was just too heavy.

Portugal has been a republic for almost a century, but monarchic descendants from the Portuguese crown gather here every year, holding and waving blue and white monarchic flags, as opposed to the green and red republican flag used nowadays and taking part in the procession. At the end of mass, after the procession, the grandson of the last king and the official royal candidate, Dom Duarte, accepts a few people into the order of our Lady of Immaculate Conception.

This year, Dom Duarte and his wife, offered a replica of the original stone image for the for the villagers to carry around in procession. The clothes were made by nuns and the image was carried by the local firemen.