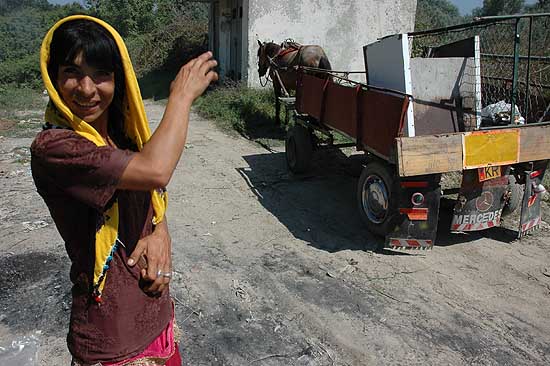 Albany of Enver at place*

Albany is no longer actuality, Albany is fashion.

Palmed from our memories, driven out from our screens, the images of boat people invading the quays from the ports of Durres, Vlora, the runaways piled up in bunches tightened in footbridges of ships for Italy, Greece.

In 1997, the Albanians just released from the yoke of one of the most archaiques communist dictatorships, sink again in economic, political chaos and only had hope while looking beyond the horizon, beyond some sea milles, towards so close and quite remote Europe.

To put an end to the insurrectionary state in the country, UNO sent in this date nearly six thousand soldiers; humane associations toke turns at the bedside of a population victim of a violent economic depression, the international institutions toke part in the rebuilding of infrastructures: transports, energy, industries in crisis.

Today, between small blows of projectors on misery, corruption and traffic of all natures, Albany hardly arouses the interest of media. One attends even this rather paradoxical situation: recently out of isolation maintained by the regime of Enver Hoxa, following successive ruptures with close Yugoslavia, then with Russia and finally with China, the Albanian society, more open than one very often imagines, is victim of an almost exile, generally reserved on the planet to countries known as "not very frequentable".

Since four years I travel over Albany "further away from close countries" always with much pleasure in feeling myself welcomed, almost, expected.
The country is not geographically immense, its surface is equivalent to Belgium.
But there's no question of crossing it at high speed, the relief does not allow that, neither the state of the road network. Small sloped mountain roads or sea-shores; the invitation to discover the richnesses of cultural heritage, history as well as the beauty of landscapes is constant; hospitality for the traveller is also a well preserved tradition.

And what about tourism? Albania, is the new eldorado for all, which recently and in great number, exhausted the adventurous capital and authenticity from the coasts of Croatia or Montenegro. The destination inevitably seduces, with the condition of not yielding to the charms of expatriation due to differences in the standard of living, or refusing the stereotypes of exotism from under developed countries.

I refuse to look at Albania under the angle of systematic pessimism or surpassed nostalgia from a delayed humanistic photography. But there is effectively an "Enver" and a place for decoration in this country; like the image of the buildings with new bright ground-floors whose higher stages remain, for some time still, in pieces.

*N.T: The original title of the exhibition is "Albanie de L'Enver à l'endroit.". In french this title is a pun with the name Evers Haxo and the expressions "envers" and "endroit", which mean wrong side and right side.