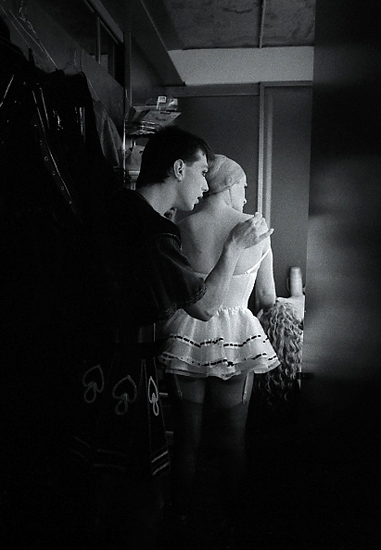 In "Backstage", I try to catch moments and rituals (that sometimes last hours...) that precede a theater play and whose access normally is forbidden to the audience. From makeup to concentration and internalization of the role that one is going to play in the following moments, everything has to be ready before the cloth rise.

Later, everything precipitates: action starts, stage entrances and exits are succeeded, changes of clothes after a fast race to dressing-rooms, only broke by interval, and the last fall of the cloth put an ending point.

An invitation from MEF (Movement of Photographic Expression) and Teatral Company of Chiado to whom I'm thankful, allowed me to register these preparativeses, on the backstage of Theater-Studio Mário Viegas, during the play currently in scene, "The Lesbian Vampires of Sodoma" from the playwrighter Charles Busch, by the Teatral Company of Chiado. The interpretation was in charge of João Carracedo, João Craveiro, Manuel Mendes, Rita Lello, Simão Rubim, Tobias Monteiro. The staging was from Juvenal Garcês.