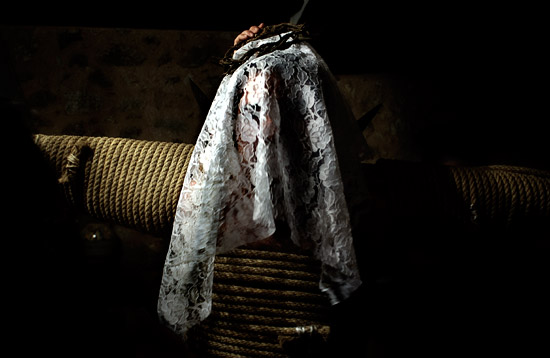 I will not extend myself about "Los Empalaos de Valverde of Vera". My words would never make justice to what I cannot understand because I'm a man without faith. Perhaps because of this I go from village to village searching the unexpected. Even if I already saw images of other photographers, I want to see with my own eyes. This is being a documental photographer: to perceive the place, to see, feel and hear what doesn't fit in a photograph's range. The work, the former, is always incomplete. Due to this I'm always searching for the next place with the vain hope to complete the unfinished.

I am a man empty of faith, what I do not understand becomes obscure and several times surrealist. My photographs are almost all, a mirror of my emptiness.

But my work as a photographer is not to discuss the belief or religion. What I can do is to provide elements so that others do it, if they want to. But careful, because the reality of my photographs does not represent the world, it is more a language that needs to be translated.

"Los Empalaos de Valverde of Vera", are anonym penitents that in the silence of dawn on Good Friday, traverse the streets of Valverde. Barefooted men, with a petticoat in white hemp charge in their shoulders a plough's wood attached with large cords that spiral their arms until it bites and paralyses their chest. At the arms ends three large iron rings are hung, called "vilortas" identical to those used to pull the plough. The severe iron tinkle is the only sound allowed during the long walk of the "Empalao" on his "Via Crucis". Finally, a pair of crossed sabres is placed on his back and head. Covering the face falls a white lace veil finished with a spine crown. This is how the "Empalao" becomes anonymous.

It's not easy, during Maundy Thursday, to find someone that says to know an "Empalao". I've made several questions, and all the people gave me subversive answers, all respect the "Empalaos" and they do not uncover them. Penitents with a major faith, reserve themselves for silence and anonymity, they seek neither fame nor heroism, only their penitence, several times washed in tears and blood.

Unfortunately I was not able to enter in an "Empalao's" house. The entire "Empalao" preparation ceremony it's very intimate. Nevertheless, I had the good chance to see and photograph the ceremony organized for the media by the culture house of Valverde. They asked for a press accreditation, that I did not had and I do not have. I?ve told I lived in Portugal about 650km of distance and that I went there only to document the "Empalaos de Valverde of Vera". I succeeded to enter, two Portuguese friends and me.

It is from midnight on of Maundy Thursday until the end of dawn, that any door, any house of Valverde, can be the beginning of a penitence way. Where he passes silence is demanded, behind him his family, wrapped in blankets for the maintenance of anonymity, accompanies him singing prayers in silence. Another person from the family that transports a night-lamp illuminates the way of the ?Empalao?. Finished the course that covers 14 stops with briefs prayers in front of crosses spread in Valverde, the "Empalao", returns home. There, after removing the cords and the wood of plough from his shoulders it's necessary that someone from his family rub his body with alcohol for him to recover blood circulation. The "Empalao" of Valverde of Vera, can be anyone.