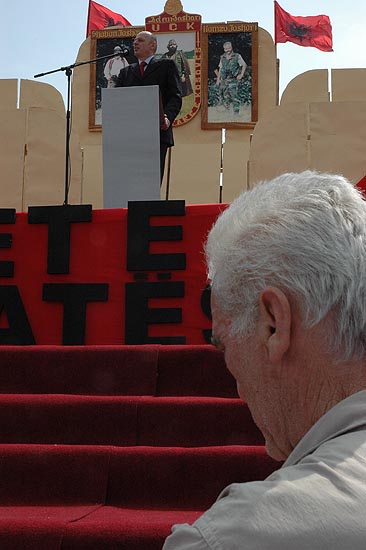 The new term is stablished for December the 10th. Until that date the Albanians and Serbes responsible for the Kosovo province, once again compromised in negotiations under occidental countries diplomatic pressure and Russian's closer look, must find a solution.

They'll stop the United Nations temporary mission, that certanly allowed to relieve tensions but, also kept it in a statu quo for eight years. They must decide a future that passes through concepts of independence, great autonomy, or even separation.

I crossed Mitrovica, city that portrays Kosovo's division, passed the reconstructed bridge on top of the Ibar river, that divides the northern Serbian part of the city from the southern Albanian part. The two communities don't seem particularly interested in being side by side, the police and military check-points are few.

In the Serbian part, time, as in a photograph, stands still and one can't stop to think about this forced wait. The turbulent agitation in the Albanian part is clear in coffees pavements, squares, the market and the works in stone-paved roadways. Works in a roundabout seem to reflect the desire to shake future's hand and quickly go forward.