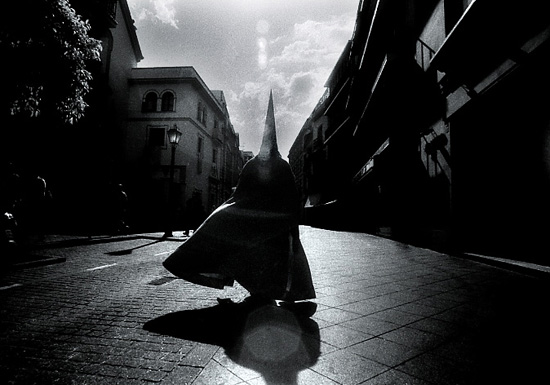 Does Ku Klux Klan born again in Spain and promenades with impunity in the center of Seville? No, of course not. It's only the celebration of Easter that happens in this city, as well as in others in Spain, in a characteristic way: the penitents wear tunics and a 'capuchón', similar to the ones used by the dark organization. The colors and their forms vary, according to the Fraternity or Brotherhood to which they belong.

During this time, in the narrow streets labyrinth from the old city full of people, the processions with origin at the most varied points of the city succeed and cross themselves, but always with obligatory passage by the 'Carrera Oficial'.

The odor of incense is intense, and silence is cuted by bands that accompany the 'pasos', or wooden frameworks with saints. The most solemn ones are accompany by a trio of oboé, clarinet and bassoon that perform parts of traditional repertory along all the way.

The population gets well dressed for the occasion, that sometimes also serves to exhibit something more than faith and devotion.

* Fifth Anguish is the name of one of the approximately 60 Brotherhoods and Fraternities that take part in this event.