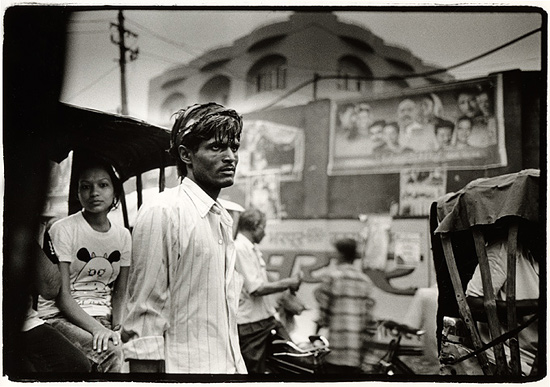 The second day, yesterday, was great, birthaday of a guru Sahib something....(i´ve forgotten his name), the siks celebrated his birthday with a big party in their temple, with a cloth on my head given to me by them I entered their temple, I didn´t take photos, traditionally everyone gets food for free many poor if we can call them poor if not miserable.

I took some photos in the middle of the people who receive the food, fat, thin, rich, poor, a present from the guru brings luck..it´s a blessing from God. The mob, incredible...

After there was icecream given from above truck, like pictures from war zones where people get food from trucks, old, young, rich, poor, grandfathers, grandmothers, children, humans of all ages, all for one icecream all fight, arms thrown into the air, all for the gift of God...

They told me this would bring them luck, I thought at first they would kill themselves with their feet because never before they had had an icecream, I got on top of the truck and I photographed into these faces and arms. And then again this incredible poorness in between all this positive feeling.

When I left, a little bit aside a woman beggar with her small girl. The child was so beautiful! more or less the age of Ariel. There was a big 5cm boil on her back, I don´t know what could it be, I had tears right away...from this moment I kept on thinking about this scene and i couldn´t take photos...I don´t find the way...anyway I don´t want to find it, it´s ok ... it only hurts.

Today I was in the main train station, masses of people waiting hours for their trains, laying on the floor over the dirt, large families, small families...sadus, again I couldn´t lift up the camera, the ones who are a more well off have their luggage transported by coolies, others fight to get in and out of the trains. In the third class wagons are hopelessly full.
They travel with open doors, people sleeping on the floor, feet hanging out of the train?

anyway everybody here is very friendly